It takes a lot to startle fans of bitcoin, the digital gold of the moment. But Wednesday was, well, a lot -- a wild run of exuberant peaks and white-knuckled declines that left even diehards breathless.

The dizzying rally in bitcoin, a bull market with few precedents in investing history, was abruptly interrupted by a market outage in the U.S. that seemed to captivate Wall Street even more than the day’s selloff in high-flying technology stocks.

Only hours after soaring past $11,000 -- a price that represents a gain of more than two-fold since September -- bitcoin plunged nearly 20 percent in less than 90 minutes. 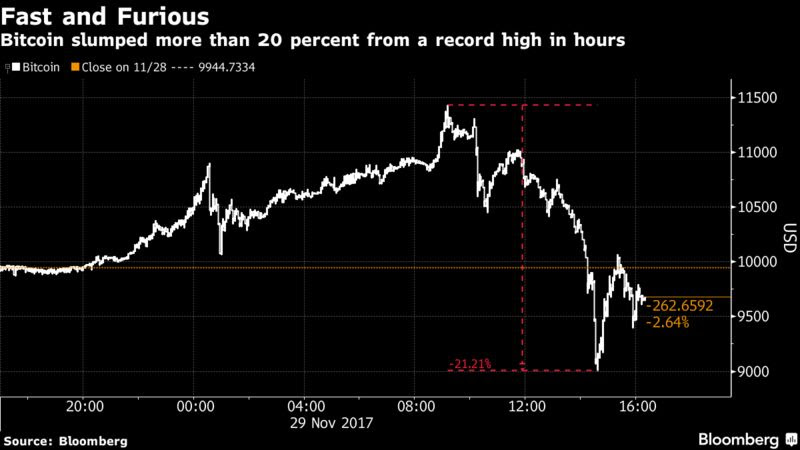 Whether the swoon represented a brief setback or the start of something worse, the wild ride underscored just how volatile the cryptocurrency has become in what some warn could be one of the biggest bubbles of all time.

“Bitcoin trading isn’t for the novice investor,” said John Spallanzani, chief macro strategist at GFI Securities LLC in New York, who does technical analysis on the cryptocurrency. “Corrections are fast and furious and you can get run over just like in the movie.”

The day started with a touch of frenzy in the air, as the digital currency took its first trip past $10,000 and yet another celebrity -- this time, pop icon Katy Perry -- tweeted about her fascination with the rally. But things suddenly seized up during U.S. hours when traffic swelled on on-line exchanges.

Confusion reined in the market for hours. Investors fearful of missing out on the frenzy were greeted instead with service outages and delays. Coinbase tweeted that traffic on its platform hit an all-time high at eight times the peak demand experienced in June. Access remained unavailable to some users.

“Issues in the exchanges add to it without a doubt,” said David Mondrus, chief executive of Trive, a blockchain-based research platform. “When you have a lack of ability to exit, then people dump in order to exit faster.”

For many, the retreat was overdue after bitcoin had rallied 20 percent in just four days in a run-up that drew increased warnings it was headed for a sharp retreat. The cryptocurrency ended September at $4,171.25.

“It’s a bubble that’s going to give a lot of people a lot of exciting times as it rides up and then goes down,” Nobel Prize-winning economist Joseph Stiglitz said in a Bloomberg Television interview Wednesday. “Bitcoin is successful only because of its potential for circumvention, lack of oversight. So it seems to me it ought to be outlawed.”

He joins a host of economists and financiers who’ve denounced the crypto rally as a craze, including most recently Vanguard Group Inc. founder Jack Bogle, who advised investors to “avoid bitcoin like the plague.”

Proponents have heard those warnings for years, and watched bitcoin’s price rise 935 percent this year alone. Those kind of gains have grabbed Wall Street’s attention, evident Tuesday as buttoned-up financiers and analysts piled into CoinDesk’s cryptocurrencies conference in Manhattan, turning the event into a standing-room-only affair.

Still, Wednesday’s jarring reversal had Spallanzani reminding investors that the ride down might not be over, at least for now.

“If bitcoin can’t hold above $10,000, a technical correction could be underway, with a drop to as low as $8,400,” he said. “Asian trading tonight should be an interesting session.”

More From this publisher : HERE ; This post was curated using : TrendingTraffic

This article was searched, compiled, delivered and presented using  BuletViralTraffic


Bitcoin Mania Interrupted, for Now, After Outage Triggers Selloff was originally posted by Viral News 2
Posted by AndrewWiggin at 12:34 PM